Alright, so I got back around to testing this and I see my mistake about assuming the EH handled the occupants as well. If I disable damage on the crew then shooting the RPG does nothing.

I believe this to be a duplicate of T75410, which has been resolved.

It appears to be functioning correctly in development branch. I take it this will be included in the next major update to stable and profiling branches?

Just a suggestion, it would probably be a good idea to make a Wiki article explaining more about the performance branch. I've read over the OP of Dwarden's thread on the forums in the past and searched for info on the wiki and still had no idea exactly what the performance branch actually entailed. I was also unaware that there was a changelog for it on the official Discord, so thank you for the link, good to know.

Not sure if I should open a new ticket for this or not, but the new feature doesn't appear to work fully.

How in the hell has this not been fixed yet?

@Wulf This is still reproducible in the 1.98 update that released yesterday.

@Wulf I'm still able to reproduce the bug with the following mission in hosted MP on dev branch.

Had another one happen shortly after that I forgot to upload earlier.

@Wulf It's been almost a year and this is still broken. The "Enable Damage" checkbox is also affected. The problem as far as I can tell is that the code is executed locally to the host. The below workaround is why I believe that.

Turned out the Nimitz Experimental Build mod was causing it in my case. I find it strange that a mod was able to cause an error related to memory without actually using up all the allocated memory.

I'm having the exact same issue on the server I run. I also used to have the same problem with ALiVE too in hosted MP, but I think that was actually using up all 8GB of my memory. The current issue with the dedicated server crashing is not due to lack of memory however. The server has 24GB allocated to it on a 32GB VPS and is crashing while only using ~6GB.

@Wulf It appears to be doing it in fullscreen as well now. If it helps with reproducability, it appears to happen when I alt-tab out and then accidentally alt-tab back in before the game can recognize it's been alt-tabbed out of; Due to lack of available physical memory the game has a hard time minimizing when I alt-tab.

@BlackShot could possibly be a Nvidia or Windows 10 problem then I guess.

@BISWizard, is there no way to develop an in-house solution or nag at Valve to fix the issue?

I just realized that I never mentioned this but the game doesn't immediately crash. When I tab back in and it gets blocked by another window the game turns to a black screen and needs to be killed with task manager. With the crash dump in my last post I had enough time to reopen the launcher before killing the game with task manager and the launcher still acted like the game had crashed and not been simply closed.

@Wulf I'm using fullscreen. Fullscreen-windowed has the flaw of blocking me from accessing the desktop in Windows 10, which I believe is Microsoft's fault and not BI's, otherwise I would be using it.

@Wulf It's still occurring, it seems. I've updated my graphics driver and I don't use the steam overlay.

7 month is not enough for Bis to block doors from opening by animals. Gratz.

These ones are from "B_CargoNet_01_ammo_F". It happens even when I first start the mission and go right into Zeus, place the box and double click it.

Unfortunately I don't have that RPT file anymore due to the automatic log rotation.

Realized this is a duplicate of T83382

@Alwin I take it this isn't going to ever be implemented? Would be quite useful for a lot of mods. CBA managed to find a workaround but there are other mods that aren't able to assign mouse buttons as inputs.

Is anyone from Bis checking this out?

Confirmed. I had a quick look into the Arsenal script but couldn't find the reason.
Ref: https://feedback.bistudio.com/T122717

Drift_91 added a comment to T125033: Planes accelerate on ground with engine on and open dialog/menu.

Have also experienced this. Very annoying. The whole point of pausing the game is so I can go AFK or alt-tab without my plane crashing into stuff. If I recall correctly this happens when entering Zeus and possibly the map as well (map might have been fixed already).

Any progress made on this?

I filed this ticket 7 months ago and it seems like no one at BI has even tried to reproduce it.

Drift_91 added a comment to T124461: Arsenal refuses to load half your loadouts if you have too many of them.

Here's my Arma 3 profile vars file which I believe contains my saved loadouts, in case it's caused by something more complex and you need it to reproduce the issue.

This also shows up along with the "Binarize task failed." error mentioned in the original post: 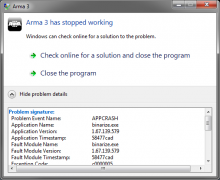 Having the problem yet again, this time with a different mod. Building the mod without binarization works fine. I don't see why this still isn't fixed.

Just discovered that it might happen persistently when joining the server after the mission has started, but not when JIP'ing the mission if already connected to the server. So I apologize if this is in the wrong thread.

I just started experiencing this today on Dev branch with the 64-bit build on my server and huge pages enabled. Been experiencing it on two separate mission files I made myself. It seems to only happen to me when the mission has already started (JIP). It doesn't always happen but once it does it will happen consistently until the mission ends. A friend and I have also been getting occasional crashes mid-game as well.

This is really annoying, as I want my buddy to be able to type inits into objects VIA zeus when I'm not around. If I give him the admin password then I can't do anything myself when he's already logged in.

Hello, can you share the parameters you're using in Addon Builder?

Come on Bohemia, it's been two years... Would this not be a quick change of a few lines of code to the asset?

Drift_91 added a comment to T82371: When I start arma through arma 3 Sync its not starting battleye service.

I get the following error when trying that solution:
https://i.imgur.com/XUc4M5C.png

I think this should be marked as solved.

Steam now opens the launcher instead, which can be used to launch multiple instances (only with the same mods selected though). You can also launch the game directly from the executable multiple times without any interference from steam as far as I know.

The only problem I have is launching the game from steam while my dedicated server is running. Going to make a separate report about that one though since this is so old and not 100% relevant.

Edit:
As soon as I go to reproduce the server issue to be sure while making the report I find it's been fixed. :P