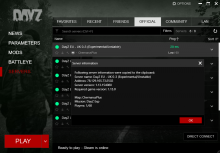 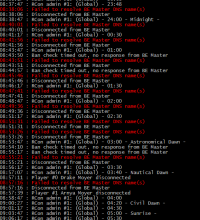 The player on my server has built the watchtower as in the pictures. He then built the stairs going to the second floor. On coming down from the watchtower (presumeably for more materials), he then found that he could not climb up again. I have also tried to climb up the stairs and could not, crouched or otherwise. Any bushes in the area that might have had an effect were removed with no change.

there is another truck on its side up at 3223 13733 approx. I will add a picture later. It only has one front wheel on it

Sorry, I havent heard it since the new update to exp either . . . .

this is melee combat with knives. .. . maybe the same issue as T137370 resurfaced

by the method above, I can refuel the gunter .. .

nope,
cannot get it to work on the sarka

I had no option to do anything when I was trying to refuel. When I respawn, I will try again with that method. ..

This is with just me on . .. more failed to resolve DNS name, Disconnect from BE master
No effect on game play though . .

and now an update

I am now getting ban check timeouts . . . the fail to receive has (currently) stopped

Hi
Yesterday the frequency of this event dropped to once in the day.
I havent changed anything, and there have been no battleye changes to my files

Hi, Is that an actual link?

ticket 153206 process goes - get out of car, car disappears. On about the fourth time the car will completely disappear and only reappear on relogging
Sep 2 2020, 8:35 PM · DayZ

looks like we can delete this now, as the messages now seems to be functional

aux7 added a comment to T143656: message.xml not functioning.

Hi
Do we have any update on this item
thanks