Tags
Subscribers
Litas, Geez, dannyloic33 and 9 others
Assigned To
None
Authored By
Joe_Scrub, Apr 5 2021

The changelog for 1.12 states:
"Increased the damage of most tools to be more efficient than fists in combat"
However, most of the tools have in reality been DECREASED compared to both 1.11 and previous patches, along with some other questionable changes to shock damage values. The changes seem so strange that I don't believe they have been adjusted as intended in the changelog, please refer to the included image: 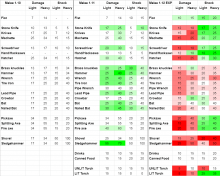 Some specific issues that stand out:

-The buffs to fist damage and shock now makes punching too powerful, you can kill a player with 4 heavy punches to the head and the increased shock damage makes punching people uncon very easy.
https://youtu.be/OmBJXzLFBgo
-The lit torch now deals very high shock damage for what is essentially a stick and it hits through blocks even with light attacks, previously this weapon dealt NO shock damage.
-The damage on the previously 'high tier' 2-handed melee weapons has been very heavily nerfed - a splitting axe light attack now does the same damage as a heavy punch and less damage than a bat.
-A LIGHT hit from a sledgehammer deals the same shock damage as HEAVY hit from a shovel, why is the shovel so much weaker, seems it should be closer in damage and shock damage given it currently weighs 6kg, heavier than the sledgehammer.
-A shovel heavy hit is only twice as effective for shock damage as just punching with bare fists (20 vs 40), and the light attack is barely any better at all (15 vs 20). Same story for normal damage (10/15 vs 15/25)
https://youtu.be/BydsHB-W3ps
-In addition to having their damage heavily nerfed, the two handed axes now deal very high shock, on par with or exceeding the shovel, which makes no sense given they are traditionally high damage low shock. The result of this is that there's no distinction in useage between the two handed axes and blunt tools, there used to be a tradeoff between damage and shock for sharp vs blunt but now they're all the same with slightly different damages.

The changelog does not reflect these changes and they don't make any sense.

It's also worth noting that all the weapons with a DAMAGE rating of 30 or higher are capable of two-hitting players DEAD to their head with a heavy hit, making many of the common melee tools too powerful.

Brass knuckles, hammer, tire iron, pipe wrench, lead pipe, crowbar & bat are all low-tier melee weapons which deal at least 30 damage with a heavy attack and can two-hit players dead with headshots. These are common tools and deal too much damage since 1.11, the balance was generally much better in 1.10, other than the 1-hit KO of the sledgehammer and shovel.

Very good post, the melee behaves very weirdly on experimental in general. The above values really should not be allowed to go on to stable, something is definitely not right. Also, why have infected received magich helmets reducing melee damage to the head by 50%? Combined with nerfed damage of all weapons and increased attack speed of the infected, and less ability of melee attacks to stagger them, this is a very poorly designed change. Please revert the head damage reduction.

I have played on update 1.12 experimental server LA, and in my opinion compared to update 1.11 the zombies are overpowered. I aggro 2-3 zombies in a town and have a shovel for melee and the shovel will not interrupt any of their attacks when being hit. So the zombie doesn't even act like being hit with a shovel phases it and just sheds it like being hit with a wooden broom while its mauling you to death with 3 other zombies. If you survive the attack you will use at least 2-3 rags or bandages, and the cycle will repeat every time you encounter 2 or more zombies. I have found that the sledge hammer is able to interrupt their attacks, but so far I think that is the only weapon that will do it.

I honestly dont know what to say about this 1.12 expiramental combat... all I can do is shake my head. Zombies in 1.12 are stupid. Whoever thought it was a good idea to remove zombies being stunned by melee weapons should be fired. I've been playing this game tons lately loving 1.11 so I figured I'd give this 1.12 a quick go.. less then 20 minutes and I simply cant take it anymore! Zombies spotting me crouched from huge distances, NO ZOMBIES GET STAGGERED?!?! WTAF, huge disappointment! Zombies are constantly dodging around doing their stupid little ape walk all the time as it is, so on top of dealing with that now you expect us to put up with them not getting stunned either??? Seriously if this gets into a stable patch I'm going to uninstall so quickly. I've been loving 1.11 and I was hoping 1.12 was gonna be some simple QOL improvements (which their are some I'm happy with), but changing zombie combat changes 75% of the game for me as a PVE player and im not okay with that at all! Leave the zombies alone please!

I hope they seriously take a look at the feedback provided here. This is a lot of great information!

i feel like the weapon nerfs and zombie buffs are a good thing, but some weapons still deal too much damage compared to others and the shock damage seems off for almost all of them.

overall that could bring back the game towards it's original direction and not call of duty with hunger and thirst.

LOL nice videos again....so if I want to knock someone out on the 1.12 update I should use my fists instead of the shovel in my inventory since my fists will be more powerful makes sense.

Hello crazyjoe101.
The weapon damage is still a subject to balance and will change in the upcoming updates.
Regards,
Geez

With 1.12 now on Stable I took the time to look through the melee config and to me the damage values look mostly okay. There are some things that are strange - all knives being equal for example, realistically the steak knife wouldn't be any more efficient in combat than the stone knife, yet it is equal to a combat knife...

What makes melee combat vs infected a bit weird currently is the 0.5 damage modifier to melee hits to their heads. This practically removes precision from the equation entirely, wildly flailing is more or less as effective as actually aiming your blows and this is wrong imo. I can see that the modifier was put there to try and balance zombie health vs damage of the weapons while also letting melee pvp and projectile damage work as it does - but the modifier does not need to be as big as 50% damage reduction. If you change it to 0,75 (25% damage reduction) players will be able to down infected slightly faster by aiming for the head. The biggest melee weapons - splitting/fire axe, pickaxe and sledge hammer - will again be capable of oneshotting a zed with a solid head hit from a heavy attack.

Imo this will not make them "too easy" since heavy attacks are very stamina intensive. And precision and strategy should be rewarded.

However, I still maintain that the melee values need some adjusting - look how much shock damage everything inflicts now, and the very low damage on the two handed weapons, the splitting axe deals the same amount of damage with a light swing as a knife or a heavy punch. All of the blunt weapons are able to 2 heavy hit players dead to the head despite being very common and already having decent shock damage and lit torches deal extreme shock damage and their attacks can't be blocked. Worst of all currently is the damage and shock that punching inflicts, with 3 heavy punches and 1 light being able to knock someone unconscious.