Trees/bushes clip in and out at visible range
Assigned, NormalPublic
Actions

Tags
Subscribers
DaGreekGeek
Assigned To
None
Authored By
DaGreekGeek, Jun 9 2022

Trees, bushes and possibly other assets are clipping (disappearing/reappearing and even flickering) in and out as the player moves along the terrain.

I first found this while playing a simple scenario "Assassinate General Makarov" that is in the workshop and sees players move north-west from Crag Point. There may be a connection to T165010. That being said, the number of trees in this area appear far greater than the screenshot tied to that bug.

I was able to replicate this issue using "Game Master" and flying around the map. Note that when using game master, it appears to only become an issue as the camera/view approach "player view/camera height" and not at higher elevation

Perhaps something is erroneously telling the renderer that those assets are not visible from the lower player height elevation and therefore do not need rendering? Just a guess. It's definitely very strange as it doesn't impact all rendered objects in the area so it seems to be a subset of objects and it is entirely possibly other assets on the map are impacted.

Taken from within the woods a bit further N/W of the same location:
https://www.youtube.com/watch?v=dt2FczzJDK8 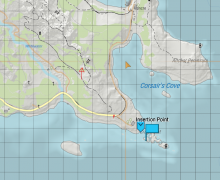 Hopefully my in game footage and more exact location of the issue al and the larger number of impacted trees/objects will help.