Pylons with DAR-rockets show up as empty/unused on the AH-99 Blackfoot's MFD showing the pylon armament (bottom left in the cockpit)
New, NormalPublic
Actions

As you can see in the attached image the pylons #1, #3, #4 and #6 show up as empty/unused although there are DAR-rockets on those pylons as indicated by the CURRENT WEAPON-part of the MFD (Multi-functional display) which clearly shows that DAR-rockets are currently selected.

In order to reproduce the problem just put DAR-rockets on any pylon (pylons #2 and #5 are not meant to carry them) e.g. via the dynamic loadout-system by selecting them or the "CAS"-loadout preset in the Object: Pylon Settings-section of the helicopters Attributes-screen in the 3Ditor or via scripting commands. Then, when playing, start the helicopter's engines in order to turn on the AH-99 Blackfoot's MFDs (Multi-functional displays) to see the pylon loadout. 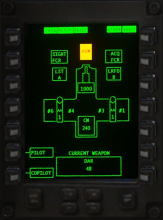 Suggestion: The issue could probably be fixed by simply using the same display components used for the DAGR-rockets since both DAR- and DAGR-pods hold 12 rockets and when using the latter the box on the MFD showing that they are on the pylons just says RKT with the number of DAGR-rockets left on the pylon in the line below.

Thanks for keeping the comments spam-free and clean, @Geez.