Tags
Subscribers
SAVok
Assigned To
None
Authored By
SAVok, Jun 12 2016

The “Pier Box” prop (that large square-shaped concrete column from Structures — Seaport) has a built-in ladder. More often than not, when a human-controlled unit finished climbing up that ladder, he progresses swimming in the air just above the ladder rather than walking above the pier surface. The unit then cannot move away usually and only has the option to climb down; accepting that option and retrying the exit may help to get on the pier sometimes, but not always. If the player continues his air-swimming, he may be occasionally teleported back to the water right in front of the ladder as if he did not climbed it at all. Impact on AI is unknown, since they seem to disregard any kind of pier ladders in general and do their best to stay away from “Pier Box” in particular, but that is another story. 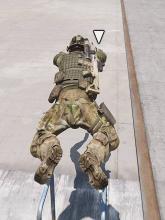 Also worth to note is that the player sometimes is not presented the option to climb the ladder at all, even if he is at water surface, — instead, the player is pushed back when trying to approach the ladder. At first glance, it seemed that only the built-in ladder (painted blue) is affected, while a standalone “Pier Ladder” (painted red, from Things — Seaport) is more user-friendly, but now that I have tried many configurations, including “Pier Platform” as well, it looks like things may depend on the relative location of structures, ladders and water surface and, more importantly, the waves — the option to climb may appear for a very brief period of time when the wave is at its climax, but it is quite difficult to catch. I know that Arma traditionally had very small radius of object interaction zone, but it is more or less acceptable when on foot and in calm water, however any significant waves make it near impossible. There are numerous reports here in the tracker regarding pier ladders, mostly dated 2013 and referring to “bug 3812” for explanations, however without a link to it, which makes it hard to find now as tickets appear to have been renumbered; therefore my apologies if that is a known issue that will not be fixed (why is not it in the “Known issue list” then?).

Any “Pier Box” object will suffice. I tried placing those props on both Stratis (in the harbor inside the airfield) and Altis (in the docks near the airport).

It's fixed - I've checked it. Ticket can be closed.