While 'stress testing' to say the least I discovered some issues with the F-4 Phantom's air-to-air missiles.

First, both the Sidewinder and Sparrow can be fired without RADAR, the Phantom's only way to see something beyond visual, which in-and-of-itself is weird for the sidewinder, it being an IR guided missile. The missiles can lock themselves onto a target without the operator locking on to the target, or even painting the target with RADAR. Sydney_Wolff pointed out that the sidewinder does not need RADAR to lock onto target. Correct, and I shall rephrase; The sidewinder should notify the pilot of a lock on, with and without RADAR.

Second, the missiles are wayyyy too maneuverable. The missiles regularly pull +30g moves, if they miss a target they will do a 180 in hopes of re-aquiring the target, sometimes I myself have been targeted by my own missile. The missiles will also do wacky maneuvering to go around flares if they lose track.

And third, the missiles have an incredible chance to acquire the target. Sure, they are the only a-t-a weapons for the Phantom but they work almost too well, working through flares, CM's and most maneuvers. The missiles will when dodging hard enough lose lock, but the missiles are nearly unaffected by CM's.

And last thing, or maybe two feature suggestions. First, give the Phantom an IR sensor, so the sidewinder can acquire targets (and display target lock-on) without the use of RADAR. Second, would it be possible to have a keybind to change the pilot's center monitor. It would be nice to be able to see the different displays, Advanced RWR and RADAR screen without having to change weapons.

V The center monitor I was talking about 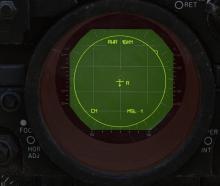 Step 0: Grab Phantom, best loadout to test is CAP
Step 1: Create enemy, locate enemy, and fire off missile in general direction. If too close neither missile will work, so use them at their ideal combat distances.
Step 2: Splash
Step 3: Profit

To find all the problems present one must try for quite the while. These things are not uncommon, but take some effort to witness.

Below is a video showing some of the issues.

There is no requirement for the radar to be on to fire the sidewinder, it's firing and acquisition circuits are disconnected from the radar system, the radar track can be handed off to the missile seeker on later models, but it's not necessary for launch, it has it's own onboard sensors.

There is no requirement for the radar to be on to fire the sidewinder, it's firing and acquisition circuits are disconnected from the radar system, the radar track can be handed off to the missile seeker on later models, but it's not necessary for launch, it has it's own onboard sensors.

Yes, I am aware of that. The sidewinder has its own IR seeker that gives of an audio tone to the pilot on the older models. What I'm saying is that (some)one needs to see the target on radar, and lock onto the target that way to be certain the missile knows what it is doing. Sure, the seeker itself knows where the target is, but if I don't know if it knows, what good does it do. The pilot should not need to use their radar to see if the missile is on target.

Though thank you for reminding me of wording, my initial statement was lacking.

Thank you for your feedback! It will now be reviewed by a specialist in our internal QA system.