Something that I always found odd was how much weaker than the 9.3mm weapons the .338NM was, while the .338 Lapua Magnum is pretty much on par with them. However, I did a bit of search and I am pretty sure I found out what is wrong:
The .338 Norma Magnum was originally developed to basically allow people to load cartridges with projectiles that have significantly lower friction coeficients than those of the .388 Lapua Magnum, while keeping the same total loaded cartridge lenght.

In order to achieve this, the case itself is quite a good bit shorter than that of a .338 LM, BUT it's volume is not TOO significantly smaller than that of the .338 Lapua Magnum! Specially since the .338 Norma Magnum both has it's cartridge seated slightly lesser deep than that of the .388 LM, and because it's "shoulders" widen a lot faster than those of the .338LM. On top of this, it is also being able to use (5%) higher chamber pressures than the .338 LM.
And the fact that the .338NM has the bullet seated a little shallower makes the already not too significant cartrige volume diference even smaller, and the slightly higher operating pressure more than likely makes up for the nearly negligeably slightly lower volume (if not even slightly MORE than just covering just the difference)

On top of that, the .338 Norma Magunum PROJECTILE is a goood bit longer AND heavier than the usual .338 Lapua Magnum projectiles. And this fact definetely should not only make it have a higher MASS, but also have a significantly lower friction coeficient (by both increased MASS/Sectional Density, AND improved Ballistics Coeficient), but also have a better penetration than even the Navid, because while moving slower than a .338LM, it is a lot more dense.

However in relation to those properties IN GAME, the .338 NM is simply underperforming. Being simply modeled as literally a "NERFED .338 Lapua Magnum". This is because it not only has the same friction value as the .338 LM, it also has a LOWER muzzle velocity (as expected) but while basically using the exact same projectile... (which means massively lower damage AND penetration, penetrating noticeably worse than even a 7.62x51/54mm rife)

TL;DR:
SPMG needs a buff to its damage, Friction Coeficient, and penetration. Because in "TL;DR" terms: it is basically a .338 LM loaded with a very heavy and long projectile that while has a slightly lower muzzle velocity than that of a .338LM, it has significantly lower friction coeficient, and significantly higher sectional density.
(Because when taking all the facts combined this should make up for the lower Muzzle Velocity at very long ranges when compared to the .338 LM because of the lower drag. And at close ranges should make their damage and penetration extremely similar, if not the same or even better!)

The MAR-10 will be able to kill him with a single shot, but the SPMG will take two.

Then get into the editor, place some walls stacked (or a house, which also works) to test the penetration. On a normal house wall, it only takes two wall laywers to stop a .338NM. On the .338 LM (and the 9.3mm Cyrus/Navid and IIRC also 7.62x54mm) take at about 3 walls to stop.

It is worth noting that when talking about "same powder type loading with SAME PROJECTILE (weight)", the .338 Norma Magnum actually achieves HIGHER muzzle velocities!

Just something to keep in mind when trying to replicate the penetration test:
It seems that getting "TOO OVERLY-CLOSE" to the target wall(s) can and may very well affect the results to some extent. Just keep that in mind, pretty much a ~2meters distance is more than enough (just make sure your muzzle is not shoved against the wall, and it should be perfectly good)
Also, you may likely want to consider adding permanent bullet tracing effects in the form of "Player BIS_fnc_traceBullets" on the INIT field of your test character.

Most of the consequences of being too close to the wall are specially for the fnc_traceBullets, which can become very unreliable...

You're right, it's underperforming. However, I will point out the SPMG has quite a short barrel (as does the Navid), which brings down the performance somewhat. Compare to photos of the LWMMG. Since the .338 Norma is only used by the SPMG and the .338 Lapua is only used by the MAR-10, it makes sense performance should be somewhat lower on the .338 Norma if you tailored both rounds for their respective weapons. Minor airFriction differences also do not have a great effect in ARMA 3, because damage change is based on velocity change, where in real life kinetic energy change is based on velocity change squared.

The real issue is that the 9.3x64 mm is massively overpowered. Energy of real life 9.3x64 mm, Russian military version, 5.1 kJ. German hunting version, 5.8 kJ. This is from much longer barrels than the stubby Navid.

And then on top of this, add the fact the 9.3 mm has a much fatter bullet, which is significantly less aerodynamic, no matter the shape, because you can't make a very long and heavy bullet to attempt to match the .338 aerodynamics, as you need to keep the weight low enough to get an acceptable muzzle velocity. So the Navid round should be lower powered, have lower penetration, and have worse aerodynamics compared to the .338 Norma (this last they got right, but as said above, it doesn't matter as much as it should).

I even made a little graphic a while back because I was annoyed on this point. 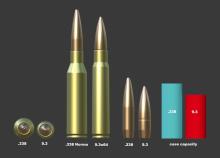 I would also like to add that Navid can destroy Orca main rotor within 8 bullets while 10 mags of SPMG does literally nothing to it.. something needs to change. There is basically no reason to use the SPMG when you could have the Navid. Shoots a lot slower and a lot less damage (even to the point that tier 4 vest and up survives 1 bullet to the chest).
This is nothing new though, since most Opfor guns are stronger and faster than their Blufor counterpart.